Tim and I left Dublin on June 14 and flew to Bergen, Norway via a connection in Oslo. It  was a surprisingly long travel day (though isn’t every travel day long, especially when it involves public transportation and airports?) and when we arrived in Bergen at 6:30pm we were feeling haggard, tired and wondered if the long day was worth it. Then we saw Bergen!

We settled into a guesthouse that’s been run by a Norwegian couple for 20 years. They live on the top level of the house and the bottom level has several rooms as well as a shared kitchen and bathroom/shower. We were delighted to see the owner Elisabeth’s friendly face after walking up a steep hill from the bus station, and then we saw the view from our room:

Bergen is a lovely city and was a welcome change from the hustle and bustle of central Dublin (though we enjoyed that too). It’s a harbor city surrounded by green hills with many houses sitting high on the mountainside. We had a relaxing dinner by the waterfront and were surprised at the late sunset–something I had experienced in Scotland too. The entire time we were in Norway, we woke up early each day thinking we had slept in, only to find out it was 5am and the sun was already up and bright.

We had 2 nights and a full day in Bergen, and on Wednesday we decided to take the tour of Edvard Grieg’s summer home high in the hills outside of Bergen. Grieg (6/15/1843-9/4/1907) was a well-known Norwegian composer who was born and raised in Bergen. Later in his life he built a summer home, Troldhaugen, where he composed many famous works.

Troldhaugen hosts tours over the lunch hour each day that include a short concert of Grieg’s works in a stunning concert hall. We first walked through his home, where we saw the small frog he used to keep in his pocket and rub for luck before performing.

We also walked down the hill from his home to visit the small hut he built so he could compose in peace and quiet. We also saw the tomb set into the side of the hill, near the water, where his ashes are kept along with his wife Nina’s. 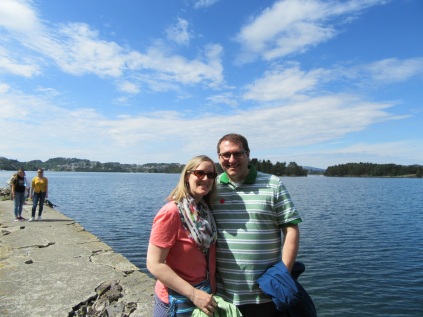 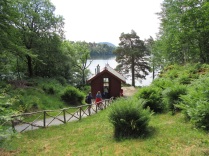 The concert hall has incredible views! 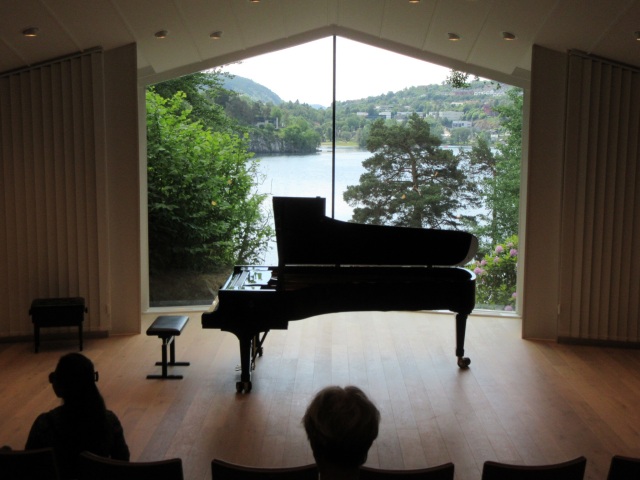 We were lucky to be there on Grieg’s birthday, and to celebrate the pianist wore a special Norwegian dress and everyone present was offered a beautiful piece of traditional celebretory Norwegian marzipan cake.

After the tour we had lunch in the Bergen fish market, a touristy lane of sellers along the waterfront with every type of fish imaginable. The rest of the day we spent relaxing and exploring the city and getting ready for our 8am ferry into the fjords the next day.